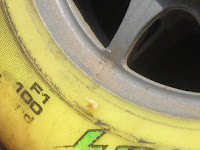 Thursday, 20-August-2015 - Veghel - Ronald came by for a visit, and we inspected my skate wheels together.  He had never seen any thing like this before.  This is a report of what we found.

History.  Wheels installed three years ago--3000 km of use.  Wheels routinely rotated to even the wear.  Bearing cleaning and was performed as needed.  Along with general condition of skates and brake pad, wheels visually and physically checked for security and roll before every skate ride.

Findings:  One wheel was removed due to failure on 18-August-2015.  Of the seven remaining wheels, five were unserviceable due to cracks (see pics 16).  Bearings turned freely.

Problem:  Front skate outer wheel broke loose from its bearing hub, causing wheel to lock in frame during operation at 20 km per hour.

Cause:  Wheel spokes cracked during normal use, and not detected prior to a weekly skate ride.  Although the skater performed a visual and physical check of skates before each ride, reading glasses were not used.  A specific inspection for cracks was not performed.

Corrective action:  After each ride and using corrective lenses or other magnification if needed, inspect wheels for cracks in spokes and hubs, replacing wheels if necessary before the next ride.
Posted by dale weiss at 5:00 PM No comments: 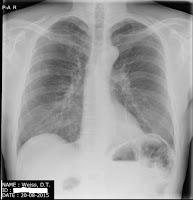 Thursday, 20-August-2015 - Uden - The X-ray this morning showed no broken ribs from last Tuesday's crash.  I went to my family doctor yesterday--it will take six weeks to recover from bruised or broken ribs. No sports for me until then.
Posted by dale weiss at 1:51 PM No comments: 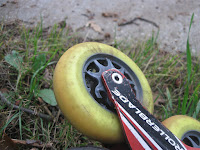 Tuesday, 18-August-2015 - Boekel - It was a cool summer evening.  Jan picked me up and we headed to Boekel for the weekly Tuesday evening skate tour.  We were just outside of Boekel, when for no readily apparent reason, I tripped, fell, rotated with legs elongated, and landed hard on my left-side back ribs on the concrete bicycle path.  I wasn't able to roll to break the fall.  I could hardly breathe or talk.  It hurt so much.  I was trying to determine if I had any broken ribs and a punctured lung.  The group huddled around me, checking to see if I was alright.  "Did you black out?" "Can you stand up?" "Maybe it's a good idea to try to continue skate slowly at your own pace so your muscles don't tighten up." Theo stayed behind me.  It was a mystery how it happened, until I tried to skate.  There was something interfering with the wheels on my left skate.  I sat down in the grassy shoulder, and saw that the all of the spokes of my front left wheel had broken free of the outer rim (photo)!  It was time for National Geographic Skater Crash Investigation.  How did this happen?  Could I have prevented this crash?  I needed to find answers before I'd do any more skating after I recovered.  Bart removed the broken wheel and move the second wheel to the front position.  I'd be skating with three wheels on my left frame.  We looked at the right skate.  The right front wheel was also ready to blow, so he moved it to the second position.  We made it to the coffee break at D'n Brabander in Elsendorp, where everyone got to look at my broken wheel.  It was a slow start back to Boekel.  Bart kept the pace slow.  Ten skaters--good for 20 km. (pics 20).
Posted by dale weiss at 10:30 PM No comments: 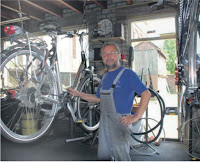 Posted by dale weiss at 9:44 AM No comments: 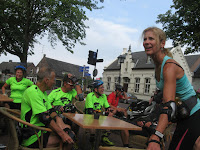 Saturday, 8-August-2015 - Oirschot - Our first stop was at the Gouden Leeuw in Vessem (photo).  Thanks to our guide Pieter for hosting this wonderful day.  Also, thanks to Jan for helping me catch up to the group when I fell behind.  Twenty-two skaters, two bicyclists, and one moped rider--good for 105 km.  pics (189)
route
Posted by dale weiss at 11:30 PM No comments: