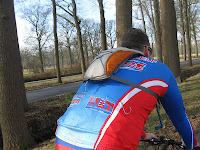 Saturday, 25-February-2012 - Den Bosch - Chris came over and we headed for Den Bosch on our mountain bikes. We stayed mostly on the paved bike paths and roads. On the way back we saw a meadow full of lambs. We were good for 54 km. pics (20) gps route part 1 gps route part 2
Posted by dale weiss at 8:43 AM No comments: 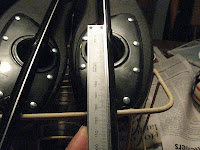 Friday, 24-February-2012, Veghel - Last evening everyone said they could see my skates needed sharpening. I looked at them this morning to see that the right skate also had a bend in the front of the blade. I took them to RONOsport to see if they could straighten it out. pics (7)
Posted by dale weiss at 9:51 AM No comments:

Thursday, 23-February-2012 - Eindhoven - After such a great experience ice skating in Kortenhoef, I didn't want to lose the feeling. Rode with Willem, Maureen, Ronald, and Jan to the Ijssportcentrum in Eindhoven. Met (dry land) skating friends from Boekel and Eindhoven. pics (11) clip 1 (43 sec) clip 2 (19 sec) clip 3 (25 sec)
Posted by dale weiss at 9:16 AM No comments: 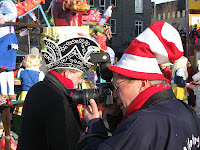 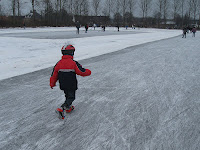 Sunday, 12-February-2012 - Veghel - Thawing temperatures were predicted for tomorrow. This was the last skating oppourtunity for the winter at the Aa-broeken pond. We had eleven days of skating here--the best year I can remember! Guess it's time to save off my beard. pics (26)
Posted by dale weiss at 10:41 PM No comments: 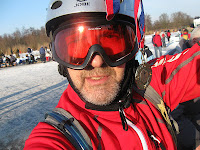 Saturday, 11-February-2012 - Kortenhoef - I called Johan as he was walking out the door. I wanted to borrow Johan's touring skates. Not only could I borrow his skates, I could also join him to skate the Plassentocht in Kortenhoef. He would pick me up in 30 min at the carpool meeting point in Veghel. I said yes and got myself into high gear. I was my first time skating on natural ice since I was a boy. Once I got used to the long-and-low touring skates and watching out for the cracks in the ice, I started to pick up speed. I felt reborn--what a thrill! The route took us through Het Hol nature and quiet area--a place where no one is allowed, except for during this ice skating tour. We were good for 40 km--we skated part of the route twice. pics (128) 25 km route 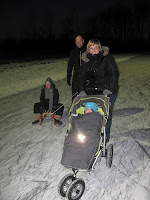 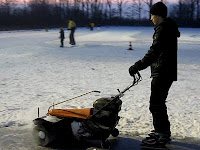 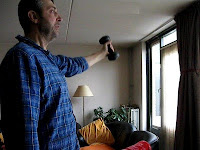 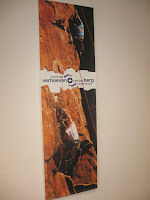 Wednesday, 08-February-2012 - Veghel - Went to my Fysiomaatwerk physical therapist Mark today before going swimming with Marij. He's helping me get my left shoulder back into shape. Didn't go skating today, but I did play volleyball in the evening. pics (3)
Posted by dale weiss at 6:17 PM No comments: 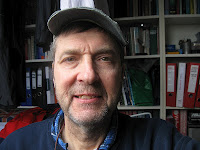 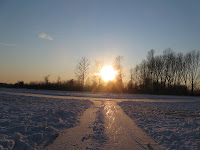 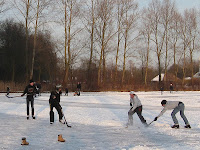 Sunday, 5-February-2012 - Veghel - It was late afternoon after recovering from catching a cold. I didn't get out of my wet clothes last evening before making supper. I headed for the Aa-broeken to check out the condition of the ice. I first swung by our neighborhood pond in 't Ven. There was music and a lot of fun going on (clip). At the Aa-broeken, I saw some good hockey action. I also met Leo--operating the snow sweeper. Later I helped Henk repair big cracks and openings in the ice on the main oval. pics (22) clip (25 sec)
Posted by dale weiss at 10:36 AM No comments: 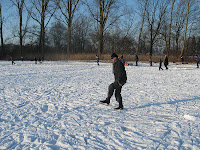 Saturday, 4-February-2012 - Veghel - It was a beautiful sunny day. I took the morning off to relax (my muscles). Got to the Aa-broeken around 1500. The Veghel Rotary Volunteers made great progress to further clear the ice of snow. More than 300 skaters were having fun (see pics). I checked the condition of the ice and cleared some mid-field snow. Watched Geert van Putten figure skate (see clip). pics (38) clip(45 sec)
Posted by dale weiss at 1:49 PM No comments:

Friday, 3-February-2012 - Veghel - At home, I enjoyed two plates of soup. My clothes were hanging to dry. It was 1600, and I was just getting out of the shower when Bas van Kempen (Marcel's son) called. Volunteers were meeting at 1630 to clear snow--bring your shovel. I was going to have dinner with my volleyball team at 1800, and then we were going to see Di-rect at the Markant in Uden. I didn't want to let my teammates down, but I trusted they would understand when I called to say that I was on a mission. I put on my gear and headed for the Aa-broeken. Big flakes were still coming down. I joined Maureen and Willem to help clear a 400 meter oval track that was wide enough to skate on. There were only 10 volunteers--we could have used a hundred. Marcel marked an inside oval about four meters from our track. Bas and his (field) hockey teammates would be coming later after practice to widen what we had started. I got home at 2030, just in time to clear my own driveway. I could hardly move. Eight hours on skates was more than enough for one day. Pics (18)
Posted by dale weiss at 8:52 AM No comments: 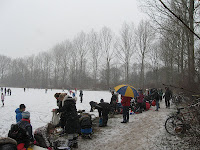 Friday, 3-February-2012 - Veghel - I was up at 0700. After coffee with Marij, I did my morning exercises. I didn't want to break anything today. After breakfast and a shower, got my gear together. I remembered that I had my summer skating protection that I could use for my knees and elbows. I rode my bike to the Aa-broeken. When I got there, I was happy to see that the entrance gate was open. That meant that Gemeente Veghel had announced that that the ice was safe for all to skate. I was on the ice at 1030, and I started to warmup when volleyball teammates Hans and Ron showed up to play hockey. I've been coming here over the past 36 years, and this was the best ice ever! We had 15000 square meters (260 x 60 meters) almost four acres) of super smooth ice to ourselves. Hans and Ron headed back to Uden after two hour of fun. I skated for another two hours to practice my puck handling skills. In just two hours, there were 300 people on the ice! The laughter of school children returned me to my youth. Snow was now coming down pretty good as predicted--10 cm was expected. We had to make sure the snow got cleared as soon as possible to ensure skating fun for the coming week. As I left the park, I spoke to Marcel van Kempen, Veghel Rotary coordinator. I volunteered to help clear the snow--I really had ice fever. pics (62) volleyball skater school children--Skating on Aa-broeken Ice
Posted by dale weiss at 7:49 AM No comments: 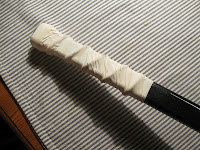 Thursday, 2- February-2012 - Veghel - I wanted to be ready for tomorrow morning when Hans and Ron would be joining me on the ice at the Aa-broeken. Watched a couple of Youtube video clips to learn how to tape my new hockey stick that I bought today at Sport 2000. Also learned why this was important. I used to think that taping the blade was only to prevent it from shattering. pics (2) blade and grip
Posted by dale weiss at 7:16 AM No comments: 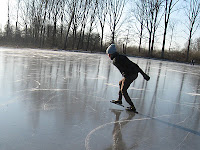 Thursday, 2-February-2012 - Veghel - Super smooth ice! Skated for three hours. The feel of the ice is coming back to me--it was great! I enjoyed watching the other skaters having fun. Afterwards, bought a hockey stick for tomorrow's friendly game here with volleyball teammates. pics (52) clip (38 sec)
Posted by dale weiss at 7:15 PM No comments:

Aa-broeken Not Yet Open for Ice Skating 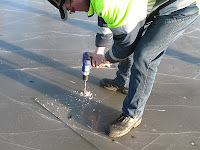 Thursday, 2-February-2012 - Veghel - The Township (Gemeente) of Veghel is closely monitoring the ice at the Aa-broeken. I spoke to a Gemeente teammember this morning as he was measuring the ice thickness. He measured 4 cm in one place, and 6 cm in another--not yet the 6.5 cm required to declare the pond safe for 200 ice skaters. I expect this to happen tomorrow. I went home to repair an aglet (veterstift) on one my skates before returning to the pond to skate on this perfect ice. pics (37) clip (33 sec)
Posted by dale weiss at 12:07 PM No comments: 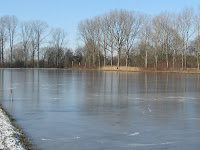 Wednesday, 1-February-2012 - Veghel - The ice at the Aa-broeken was too thin for skating today. It was only 3 cm at the edges this morning. I returned at noon with my skates and tried skating, but the ice would crack for about 10 meters in front and in back of me with each stride. The sun had weakened the ice a bit. Last year, I took a chance skating on thin ice; but this year it'll be cold for the coming week--no need to take chances. I'll be back tomorrow morning with my skates. Here is the current ice thickness forecast. pics (38)
Posted by dale weiss at 4:29 PM No comments: