More Skating at the AA-Broeken 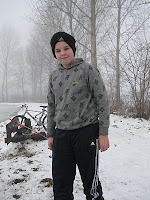 Thursday, 30-December-2010 - Veghel - The snow and ice were melting. Went to mail some greeting cards on my way to go ice skating, but discovered our local mailbox had been removed as a precautionary measure to prevent vandalism.Met Niek at the AA-Broeken. He's the bass player in the Fioretti school band. He was waiting for his cousin Huub to arrive so they could play hockey.
http://picasaweb.google.com/dale.weiss.planet/Ice_skating_aaBroeken_20101230#
Posted by dale weiss at 11:46 AM