The Streets Were Empty 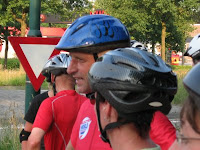 Tuesday, 17-June-2008 - Boekel - The streets and roads between Boekel and Veghel were nearly empty as I bicycled back from the Tuesday Evening Skate in Boekel. As I passed by a cafe along the main street in Erp, I heard the football (soccer) announcer through the open door. The match had started. Holland was playing Romainia. I was hoping I could make it home before the first goal was made http://en.euro2008.uefa.com/.
Today I was better prepared: I ate a big plate of spaghetti at 1730, I rode my bike instead of skating to Boekel, and I had a new set of bearings and wheels. That made all the difference in the world. The route was cut short to return at 2015--everyone wanted to see tonight's match. With 20 skaters, we were good for 20 km.
http://picasaweb.google.com/dale.weiss.planet/Boekel_skating_tuesday_20080617
Posted by dale weiss at 8:46 AM