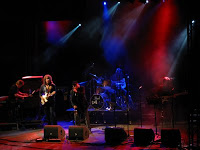 Saturday, 21-June-2008 - Heeswijk - It was the longest day of the year. Marij and I were getting ready to go see Cuby and (the) Blizzards http://www.cuby.web-log.nl/ and other popular rock bands at the bi-annual Oldies Back on Stage gettogether http://www.oldiesbackonstage.nl/. This year, a special edition was organized at the nearby open air theater de Kersouwe http://www.kersouwe.nl/. A large-screen TV was set up, because the Dutch national football (soccer) team is playing in the Euro Cup 2008 quarter-finals tonight against Russia http://en.euro2008.uefa.com/. Marij and I left the house after the game had already started. We followed along, listening to the radio. When we arrived the first band was just finishing up with their set. We sat back and enjoyed the show, as the sun made way for the stars.
http://picasaweb.google.com/dale.weiss.planet/Oldiesbackonstage_outdoor_2008
Posted by dale weiss at 8:52 PM