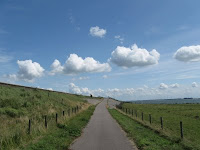 Monday, 20-July-2009 - Hellevoetsluis - It rained last night. Got up at 0830, and check the weather radar. The forecast looked good. Saw a blue sky with with cummulus clouds parading past--the wind was a steady force 5. Ate breakfast, and then sent a letter off to Vanderlande Industries. After lunch, put my skates on and headed for the dike along the Haringvliet waterway. I followed paved paths and roads to the ferry at Nieuw Beijerland--about 18 km. I had the wind behind me all the way. Had a chat with an 82-year-old lady bicylist while I was looking at a map deciding which route to take home. She also had the wind to contend with to get back home. Took the same way back against the wind. when I got to the Bernisse waterway, I followed it to Zuidland. It was then a straight 10 km shot back to Hellevoetsluis. When I got back, Zoë was waiting for me to tell me that I was late for supper. She usually eats around 1700.
http://picasaweb.google.nl/dale.weiss.planet/Dale_vacation_hellevoetsluis_day_03#
http://www.youtube.com/watch?v=YYJDgSUvjuU
Posted by dale weiss at 7:03 PM