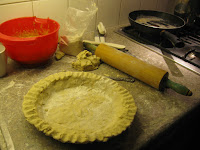 Thursday, 24-November-2016, Veghel - It's Thanksgiving today in the United States.  I made my first crust and pumpkin pie.  The last time was 60 years ago with my grandma Weiss.  I wanted to make the crust from scratch, and I was trying to remember how she did it.  I used this crust recipe from E.D. Smith, along with canned pie filling.  When the crust stuck to the counter as I was rolling it back onto the rolling pin, I called my sister Jane to get some help.  I knew how her pies came out of the oven.  I later found some nice videos to help me the next time--I need to work on the crimped edge.  Then I'll make the pumpkin filling from scratch too.  Oh yes I forgot.  Except for the well done edges, it tasted great.  Pics (10)

how to roll out a pie crust
how to make a delicious pie crust from scratch
Posted by dale weiss at 1:30 AM