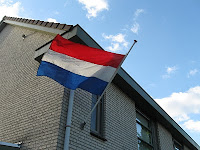 Tuesday, 4-May-2010 - Veghel - Today, people of the Netherlands remember those who gave their life since the onset of World War II during combat and peace-keeping missions. At 2000, there's two minutes of silence all over the country. I watched the ceremony in Amsterdam on TV. A disturbance caused a panic situation, injuring 63 people. The Queen was quickly ushered to safety; showing great courage and leadership, she came back within minutes to resume the ceremony. Chris came over later with his dog Fester.
http://picasaweb.google.com/dale.weiss.planet/Remembrance_day02#
Posted by dale weiss at 7:59 PM