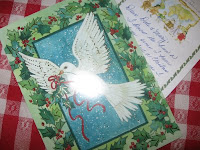 Tuesday, 02-December-2008 - Grand Rapids, MI - We got our first Christmas card today from Loretta Morris. We met Loretta and her family when we were on a family summer vacation trip in 1992, visiting her son Gary at her home in Grand Rapids. Gary didn't want us to come at first, because he hadn't told us that he was ill. He was skin and bones now. That didn't matter to us; he was our friend, and we were determined to see him. We had a great visit--he had a good day. We had fun and laughed together. His sense of humor was still as sharp as ever, but he got tired after a couple of hours. His sister Janis treated us all to hamburgers at the A&W. He died two months later from AIDS. Gary was a fellow airman, and a friend. We were stationed together in Turkey, and again in Belgium, where he became a family friend for us all.

May this dove
Bring Peace from above
To the friends you cherish.
To the family you love.
~~~~~
And may Christmas bring
Renwed Peace to your heart
As the old year ends
As the New Year starts.
Posted by dale weiss at 1:31 PM